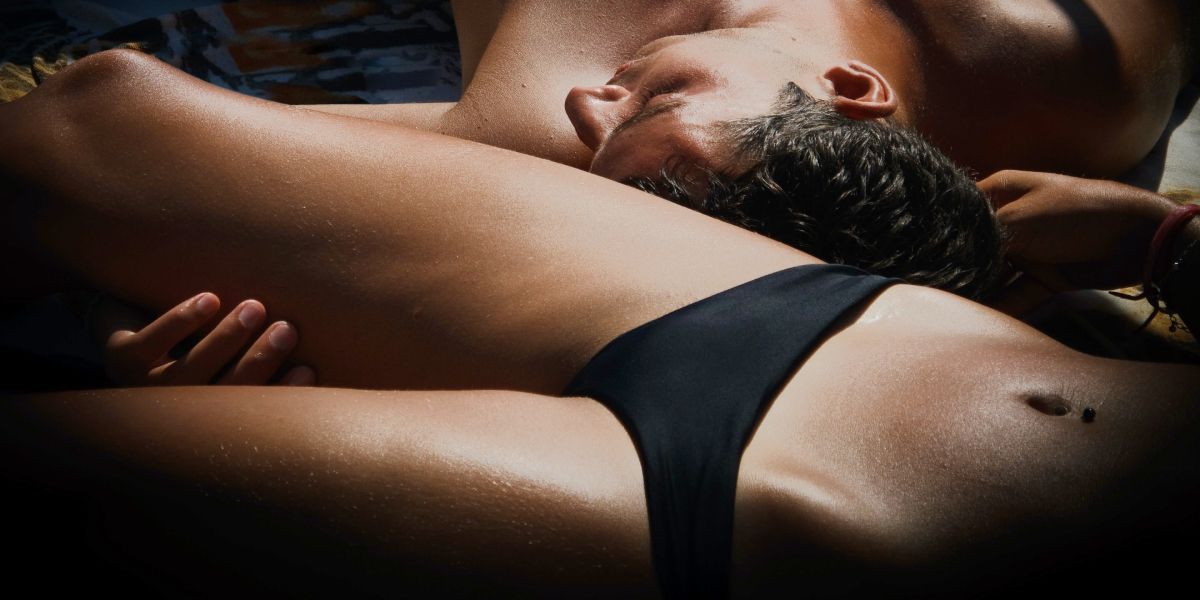 When my husband, Greg, and I were thinking about how to celebrate our upcoming tenth wedding anniversary, we agreed that our sex life had become a little too routine. After all, we'd had nine other anniversaries together before that one, and the thrill of the celebration, much less the relationship itself, was more or less gone.

No wonder I was so intrigued when Greg said he'd made some special plans this year. On the night of our anniversary I put on a sexy, low-cut dress.

Greg took me to dinner in the plush dining room of the best hotel in Houston. We had a sinfully delicious meal, savoring the intimate atmosphere as well as the fine food.

Greg kept peering lasciviously down the front of my dress. By the time dinner was over, I'd decided some good, old sex would hit the spot--for me, anyway. And I could see by the bulge in Greg's pants that he was thinking the same thing

After dinner, we sat for a long while at the table, drinking margaritas and whispering sexy things to each other. Greg slid next to me in the small booth and let his hand creep up under my dress, making my thighs tingle with pleasure and anticipation.

To my surprise, Greg handed me a room key to the hotel, explaining that we were going to make a night of it and even have breakfast in bed the following day.

All that sounded delicious to me! Arm in arm we rode the elevator to our floor and found the room.

Greg unlocked the door and pushed it open. I stepped inside the semi-darkened room but stopped in my tracks! I was sure there was some mistake.

In the twilight I could make out two pale figures on a double bed, sheets pulled down. Even in the semi-darkness it was obviously a naked man and woman. The woman was sitting astride her partner's erection, riding it slowly.

"Omigosh!” I gasped. “I'm so sorry!” And I quickly turned to leave the room.

“Nonsense,” a relaxed male voice murmured from the bed. “Why don't you stay awhile?” To my utter horror, Greg had closed the door behind us.

“We have the wrong room!” I said, embarrassed to my toes.

“No, we don't," Greg replied, a bit sheepishly.

Comprehension was slowly dawning. I stepped away from my husband and the bed and leaned weakly against the wall.

Gingerly, Greg went over to the bedside table and turned up the lights. The woman was very pretty: That was the first thing that crossed my mind. She had long, dark hair; deep, brown eyes; and full, upright breasts tipped with large, rose-colored nipples. They were fully erect, and she flicked at them casually with the fingers of one hand.

“Oh, my,” I gasped as I watched the young woman swivel her hips on the naked man's stiff cock.

Sliding his hands around his partner, the man began caressing her pert nipples.

Then he stroked her breasts and her thighs down between her legs, almost touching his own cock. He caressed her swollen pussy lips and then moved to her clitoris.

The lovers weren't six feet away from me, and despite my embarrassment, I was utterly unable to tear my eyes from the man's probing fingers. I felt a wetness below that told me I was turned on by the scene.

In only a minute, still riding his erection, the woman climaxed. I was so close to them, I could actually see the ripple of her contractions as she reached orgasm.

I began to feel an ache deep within myself for a release like that, and I longed to be stuffed full of this attractive man's cock.

Without thinking what I was doing, I stepped forward and lightly touched the slick tip of the stranger's softening cock.

“Ummm, do that,” the woman whispered. She was now seated beside the man on the bed. She was speaking to me, but she was looking at someone else when she said the words. I followed her eyes and saw my husband, whom I'd just about forgotten.

Greg no longer had a bulge in his crotch. Now his cock was outside his pants, which were down around his knees, and he was holding it in one hand.

It was harder than I had seen it for a long time.

I was standing at the very edge of the bed, and now I felt a large, warm hand slithering up my thigh beneath my dress.

The man on the bed was groping me! I watched his hand move underneath my dress as if it were happening to someone else. Catching the elastic waistband of my pantyhose, he brought them and my panties down over my thighs with practiced ease.

Then I felt his fingers on my pussy.

Stroking my cunt lips, he wriggled his long fingers inside the wet, slick folds of my snatch and stroked me knowingly. I parted my thighs, helpless with pleasure, thinking I was going to come over and over if he kept it up.

I looked up, mostly to distract myself, and saw that the girl was now giving

The man on the bed evidently saw that I was watching his partner's escapades with some envy, because he rose suddenly, eased me down onto the bed and ran a very professional tongue over the same part of me that his fingers had just been touching.

Shocking me, he even darted his tongue around my rectum, bringing me an excitement I'd never dreamed of.

I exploded in orgasm, forgetting that a woman I'd never seen before was deep-throating my husband only a couple of feet away. But my new lover didn't stop when I came.

He continued to caress me with his tongue and proceeded to bring me to a second, shuddering orgasm in only another minute.

Greg apparently came at the same time I did. When the last spasm of my climax ended, I looked over and saw him standing with a not-yet-soft cock, stroking the girl's cheek and smiling, totally satisfied.

"Happy anniversary,” he said softly to me.

The other couple smiled, and they both rose simultaneously. Apparently they were going to leave. “Wait a minute!” I muttered. “What's going on?”

The woman smiled thinly. “We're done, aren't we?” Again she looked at Greg when she spoke.

“You're prostitutes?" I gasped, addressing the still-naked man who was standing practically next to me.

He smiled and nodded. “That's what they call it.”

Greg cleared his throat. “It's not necessary to leave.” As if on cue, the girl turned expectantly to Greg, and they moved away from the bed. I knew perfectly well that money was changing hands, but I didn't care.

“Do you know what a daisy chain is?” the man asked me as he came back and sat down beside me on the bed. I shook my head. “I'll show you,” he said.

At that, Greg and the girl came back to join us on the bed. “Now we've got cocks and pussies and tongues and fingers,” the man explained. “Let's see what we can do with them.”

The four of us went absolutely wild.

The girl worked Greg into a state of erection that made me a little jealous - I'd never seen him that hard before! Then, while the guy started tongue-fucking my away any inhibitions I had and went down on both the girl and Greg, licking his cock as it slid in and out of her vagina.

The guy moved around so that his cock dangled in front of the girl's face, and the four of us became one large, wonderful mass of fucking flesh pussy.

When I think about that anniversary celebration, I most vividly remember being linked cock-in-pussy, cock-in-lips with my husband and that gorgeous professional stud. Before, I'd dreaded our wedding anniversaries. Now we celebrate those and lots of other special occasions-practically every month!