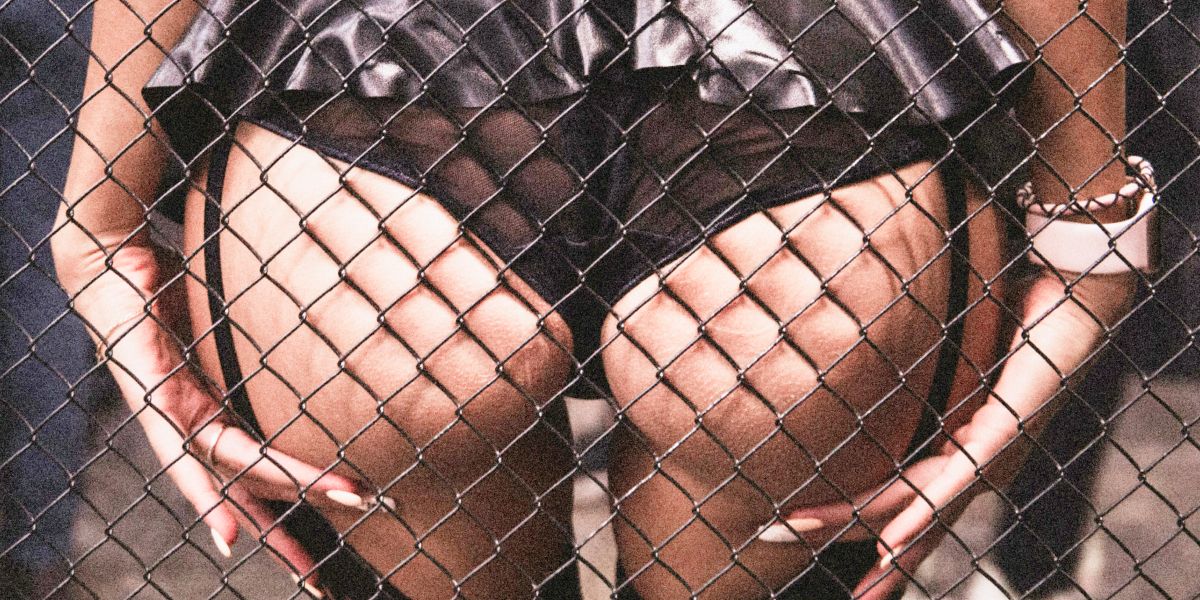 I recently spent 21 months as an inmate at a medium-security prison, where you only see real women in the run-down visiting room － a long corridor split down the middle by a waist-high divider. On each side are wooden stools and a narrow tabletop to rest your arms on.

If your visitor is a woman, you're allowed one brief hug per visit, depending on how the guards are feeling that day. The most you can do is cop a quick feel of your old lady's tits during the hug, and by doing that you're taking a chance of going to the hole for solitary confinement if the guard spots you.

After 21 months of that bullshit before my case was reviewed, I was sent to a minimum-security prison with more relaxed rules.

This minimum-security prison had plenty of women caseworkers, administrative staff, and quite a few guards. Only a few of them were actually pretty, but to me, in my sexually deprived state, they all looked like Playboy centerfold models.

Because I had gotten my high- school-equivalency certificate and had earned 12 credit hours through a college program at the medium-security prison, I was assigned to the library as a clerk.

On my first morning I showed up in the library at 8 o'clock.

When I saw the librarian, I nearly creamed my jeans! She had shoulder-length brown hair and dark brown eyes that shimmered in the light.

I didn't know what to say to her; all I could do was move my lips as if I were a goldfish.

She asked me my name, how old I was, what I'd been charged with and how much time I had left to do.

Soon, though, I got over the shock of her presence and continued the conversation. She told me her name was Letitia and that she was in her mid-30s, had been married and divorced twice and had a couple kids at home.

She told me to take a look around and get familiar with the placement of the books and magazines. After checking the place out, I returned to her desk and sat down.

I complimented her on how neat and orderly everything was. I told her that I was a quick learner and would be in the swing of things before she knew it.

Letitia started telling me about a lot of stuff, but I wasn't paying any attention to it. As the morning hours passed, I was interested only in what she was sitting on and concentrating on a way to get into her pants.

I studied her from head to toe.  She had the face of a cheerleader and the legs of a tennis player. I had a hard time believing she was as old as she said she was.

Her breasts were large, firm and unrestrained by a bra, and her nipples showed through the nylon material of her blouse.

When she crossed her legs, her skirt rode high on her caramel-colored thighs.

Suddenly her voice changed, and I could tell she had just asked me a question. But I didn't have any idea what it was.

“Beg your pardon?” I asked.

“How long has it been since you were on the street?” The smile was back on her face.

“Twenty-four months total. I spent three months in jail before going to prison.”

“That's pretty obvious, the way you've been staring at me," she said.

As I blushed and tried to find the right words to apologize, she added, “Hey, it's OK. I can imagine how you feel. I'd hate to go a week without sex, let alone two years!"

The conversation's turn to sex had aroused me, and despite my efforts to keep cool, my dick started getting hard.

She noticed it and asked, “Tell me, what do you do to ... I mean, how do you manage to relieve yourself sexually?"

I wondered what she was trying to do to me.

I started to tell her about the time I paid two packs of cigarettes for a blow job from some punk. He was a young skinny guy with only about half his teeth, and he came in to my cell just before lock-up, bent over and sucked me off real quick.

It was no big deal, nothing to write home about. But then, smiling at the thought of her probable reaction, I decided against telling her that.

She laughed at my attempt at humor and glanced at the bulge in my crotch.

“That's a real shame,” she said in a sympathetic voice.

She looked up at the clock and noticed it was nearly lunchtime. She explained that although she usually left the prison complex to eat lunch, she wasn't going to do that day because she wasn't hungry.

I told her I wasn't that hungry either.

The gleam in her eye said she approved of my answer. She got up and went around the tables, saying, “The library closes in five minutes, fellows.”

One by one, the inmates returned their books to the shelves and left the library.

After the last one had gone, Letitia went to the door and secured the bolt. I locked the other door to the supply room.

When I returned to her, she was sitting in a chair with a sensuous grin on her face.

Her blouse lay on the floor beside her.

She raised her left leg in my direction and asked me to give her a hand.

I knelt in front of her like a shoe salesman and gave her boots quick but gentle tugs. Kissing each foot, I looked up and watched her nipples pop out like buttons. She stood up and dropped her skirt. Her panties were light-green like the ocean. Then she peeled them off.

When I stood up, Letitia unbuttoned my shirt. At the same time she kissed me, darting her tongue between my lips, meeting my tongue, flicking it lightly.

After she finished with the buttons, she pulled the shirt back over my shoulders and let it fall to the floor.

She dropped to her knees and unbuckled my belt.

I slipped my shoes off and kicked them aside. Next she unzipped my fly and tugged my pants to my knees, causing my hard-on to press out against my shorts and make them look like a tent turned sideways. When Letitia whipped them down, my cock shot up like a jack- in-the-box and bobbed before her eyes.

“Yum!” she said just before slipping her lips around the head and pushing them toward my pubic hair. Almost instantly my knees weakened.

My whole body trembled, and I had to brace myself on her shoulders to keep from falling. Her head was moving like a piston now, her lips greasing my cock. She grabbed my ass to plunge me deeper into her.

Finally, she pressed her face against my crotch, swallowing my cock whole.

When I exploded in her throat, it felt like an atomic blast.

I jumped out of my fallen pants and underwear and sank to my knees. Her hot, moist bush smelled sweet as I sank my face into it. I ran my tongue slowly over the outer lips. I put my hands under her soft but firm ass, sliding my thumbs to either side of my active tongue.

Gently I opened her sweet cunt and probed it.

Her moans sent shivers up my spine. I pushed my face deeper and started fucking her with my tongue. When she began to get juicy, I slipped my fingers into her pussy and moved my tongue to her clit, flicking and fluttering it.

Letitia went wild massaging my shoulders and neck, forcing my face harder between her thighs. Her orgasm was as hard as mine had been.

After her moaning stopped, I looked up at the clock. Shit! Lunchtime was nearly over.

Letitia's eyes were still closed and a contented smile rested on her face as she sprawled in her chair with her legs draped over my back.

She opened her eyes and took her legs off my shoulders, got up and went over to clean off her desk. “Let's finish what we started, then.'

She bent over her desk, propping herself up with extended arms and wiggling those buns at me. They were creamy-white against the tan of her legs and back.

I stepped behind her and grabbed her thighs.

Slowly I entered her pussy doggy-style and reached my hands under her to cup her tits and rub her erect nipples. I stroked in a leisurely, circular motion, and each time my hips came around she backed closer to me, taking my cock deeper into her.

We moved together like a synchronized piece of machinery until we both reached shuddering climaxes.

We dressed quickly, and Letitia sprayed air-freshener around the room.

There's nothing like the smell of good sex, but not in a prison library. While she combed her hair, I kissed her and told her she was fantastic.

I had a good friend and lover from then on. We spent every weekday “studying" through lunch hour in the library, until one day I got busted for having a phone and was returned to the medium-security facility, where I now sit writing this.

The memories of my sexy librarian Letitia are wonderful, and they'll hold me for the remaining time here.

Five more months and I'll be out. But this time I plan to indulge in only one crime －eating pussy!